Taman Ujung is one of the many water palaces in Bali. This park is the sister of the Tirta Gangga water palace. Both of these parks were built by the King of Karangasem in the middle of the 20th century.

Taman Ujung is quite unique because it is not fully built in the Balinese style. There are elements of European architecture that are employed to build this magnificent park that lies between the sea and the volcano.

Like Tirta Gangga, Ujung Park was built as a royal park. This park was constructed at the initiative of the King of Karangasem; I Gusti Bagus Djelantik or better known as his noble title; Agung Anglurah Ketut Karangasem.

However, this park was not built as a bathing place for members of the royal family. This park was actually built to punish Balinese black magicians known as Pangiwa and Leak.

The swimming pool built in this park named ‘Kolam Dirah’, was built in the early 20th century. The name the pool is taken from the Witch Queen in the legend of Calonarang. Then two other ponds were built and connected with a narrow but beautiful bridge.

Some pavilions were also added as a place of rest and meditation for the king. Slowly, Taman Ujung shifted function into a resting place and also a place to welcome the honored guests of the Kingdom of Karangasem.

Taman Ujung is one of the most instagramable places in the eastern part of Bali. This park is situated between a mighty volcanoe and the sea. There are so many photo angles that you can take, whether you want a mountain background or a sea background, you can have them all.

In addition, the architecture of the Park is also quite unique with a combination of Balinese and European elements. If you visit Taman Ujung, don’t be surprised if you see a lot of photo shoots going on there.

This park is located in Banjar Ujung, Tumbu Village, Karangasem Regency. If you depart from Kuta, you need about 2 hours’ drive to reach this place. At present, almost all tour tours in eastern Bali include Taman Ujung in their itinerary.

If you just come to visit and enjoy the beauty of the park, ticket is quite cheap, around 1 US dollar. But if you come to do a photo shoot, you have to pay Rp. 600,000 for the whole crew during the shooting process.

Taman Ujung has a unique history, even if you compare it with other parks in Bali. This Water Palace is located in a unique position, between the Mountain and the Sea, so it has an amazingly beautiful natural panorama. The combination of natural beauty and unique architecture is the main attraction of this Royal Karangasem Kingdom’s park. 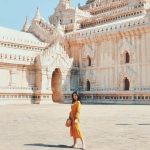 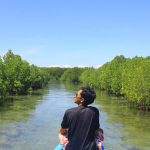