A lot has happened in June in Indonesia. It was a really hectic month for this huge country. There were Lebaran and the whole kit and caboodle that goes with it. The roads in Java were literally flooded with vehicles from and to Jakarta. There was also the political noises with all Presidential election trial that lasted until the last days of June. However, that are not the only things that went viral in Indonesia.

Among those loud noises, you can still read lots of interesting news. There are uplifting, inspiring, and straight up concerning news from this +62 country. Here are some of the news that went viral in Indonesia last month.

A preacher stepped into the spotlight when he said that the Al-Safar Mosque in the rest area KM 88 B of Cileunyi toll road is a hidden work of Illuminati. This, of course, caught a lot of attention because the architect is Ridwan Kamil, the current governor of West Java. Kang Emil, as he is usually addressed, had to make a clarification. He explained to the preacher about the concept of trigonometry, shapes, and spaces. Turns out the mosque was inspired by nature and origami.

During the mudik and Lebaran period, many netizens complained about the expensive and yet scarce flight tickets. For example, you have to go around to Bali if you want to fly from Jakarta to Medan. And it was sold out too. The complaint went viral in Indonesia. The government apparently heard the complaint and urged the carrier to lower their prices. Good news for the travelers, Citilink and Lion Air, the two low-cost carriers in Indonesia plan to do so.

The Capital City of Indonesia was just celebrating its 492nd anniversary. As always, it was a huge celebration worthy of the biggest city in the country. The climax of the celebration is at the Jakarta Fair with a rousing concert and of course a wonderful firework display. Anyone in Jakarta really shouldn’t miss that one. If you did, make sure you attend this massive party next year.

Tri Rismaharini, mostly known as Risma, is the mayor of Surabaya, the second biggest city in Indonesia and the capital of East Java. She is deeply loved by Surabayans. She is also popular because she built a lot of lovely parks in Surabaya. Unfortunately, Risma fell ill because of acute ulcer problem and asthma. National leaders including the President himself as well as several ministers visit Risma at the hospital. Lots of people wanted to visit her too but it is not possible so Risma just says her gratitude via a handwritten message.

Indonesian Netizens was amazed by a picture of a residential area. Indeed, it was no ordinary housing. The houses are on top of a shopping mall. The entire housing complex is located on the 10th floor of Thamrin City. Even though it is located on top of a mall, access to this complex is really exclusive. Only those who live there or has an invitation can go to this magnificent house. Otherwise, you would be stuck on the ninth floor. Many people want to visit it, only a few can.

Indonesia always has interesting stories to tell. The netizens in this country can be a savage, a troll, or really creative and funny. It is always interesting to see what is going viral in Indonesia. 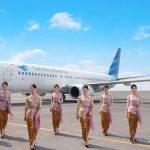