Not Only Noodle, Here Are Some Traditional Belitung Dishes Belitung is a wonderful place with a lot of wonderful natural view. The northern coast of Belitung is simply otherworldly in term of beauty. Tanjung Kelayang Beach will blow your mind with its rock formations and generally wonderful white sand. However, traditional Belitung dishes should be on your list when visiting this island.

There are many wonderful traditional dishes that you can enjoy in Belitung. The most popular one is definitely Mie Belitung (Belitung Noodle). However, that’s not just the only one. Many of them are usually seafood-based dishes. It is really understandable since Belitung has a long coastal area with rich waters. Here are some of the traditional Belitung dishes that you should try.

Berego is a dish made from processed rice and sago flours. The flours are thickened, rolled, and then cut into pieces so that it looks like a thick kwetiaw noodle. A distinctive feature of this dish is the thick and savory fish curry. Berego can be an appetizer or main course, depending on your preference.

Gangan is basically a fish soup. It is usually yellow due to extensive turmeric use. Gangan is usually spicy and sour. These flavors come from the pineapple and chili pepper. In addition, other herbs are also used to make Gangan. Herbs and spices such as onion, garlic, red chili, galangal, lemongrass, candlenut, and also tamarind. For the fish, they usually use ketarap, ilak, and baronang which are abundant at Belitung waters.

Despite its almost similar names, Suto Belitung is not a type of soto. That is because the ingredients for both dishes are very different. Consequently, the tastes are also different. Suto Belitung usually uses ketupat or lontong, cut into bite-sized pieces. They are then doused with thick rib curry. You can also add rice vermicelli, sliced meat, and crispy chips.

This is the snack if you are a seafood lover. Also known as the perkedel rajungan (crab cakes), the cooking process is a bit unusual. First, they remove all the meat from the crab, mix them with seasoning and spices. Then, they stuff all of them back into the crab shell. After that, they deep fry them. The flavors are just magnificent, and the eating sensation if so unique.

Apart from many delicious dishes, Belitung is also popular for its coffee. In fact, Belitung original coffee merchants have expanded to many other cities in Indonesia. Traditionally, most of the legendary coffee shops in Belitung is from Manggar, East Belitung.

Pais’ cooking process is similar to pepes from Java. They wrap fish with spices in banana leaves and then grill it. However, the ingredients used in making Pais are slightly different to pepes. The spices used are almost like spices used to make gangan such as onion, garlic, red chili, galangal, lemongrass, candlenut, and also tamarind. All the spices flavor get into the fish well, making it really delicious.

Belitung is a wonderful island, rich in natural beauty as well as delicious foods. If you are lucky enough to visit this island, make sure you enjoy all the traditional Belitung dishes. 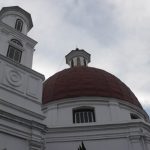