Temajuk, a Unique Beach at the Indonesia-Malaysia Border The western part of Kalimantan is often considered as the ‘tail’ of the island. Kalimantan does look like a bird or chicken, with the northeastern part act as the head. Temajuk is a village in the tail of the island, just to the south of Indonesia-Malaysia border.

Temajuk has a wonderful story. This place got its name from the fact that it was the entrance of communism in Sambas Regency. Temajuk stands from Tempat Jalur Masuk Komunis (the entrance of communism). Despite its history, this place now has become a popular tourist destination. Here is what you need to know about Temajuk, a village in the tail of Kalimantan.

Temajuk is situated at the northwestern end of Indonesian part of Kalimantan. It is a village in Paloh District, Sambas Regency. This village is roughly 350 kilometers to the north of Pontianak, the capital of the province. Along the way from Pontianak, you will get through Singkawang, Pemangkat, and Sambas. The road from Sambas to this area is a bit challenging and you have to hop on a ferry twice.

There are several beaches that you can enjoy in Temajuk. There is a general theme to all beaches in these shores. The beaches are adorned with granite formations with gold and brown sands. Usually, you only find karst or limestone rocks on the beach. In a way, this place is similar to Tanjung Kelayang in Belitung.

The most popular beaches in the area is Batu Nenek with its many granite formations and several trees. Pelaik Beach also has similar traits, only the rock formation is not as big. Temajuk Beach is also quite well-known due to its proximity to the village.

Temajuk is originally a fishing village with low income. Atong, one of the villagers in the village wanted to change their village’s fortune and he chose tourism to achieve that. He pioneered the tourism effort by establishing a small restaurant and a humble resort with only three rooms. It turned out well and other villagers started to support the effort.

Today, you can find many choices of accommodation in Temajuk. It’s not only food and shelter, but you can also get other facilities such as umbrellas and bean bags to enjoy the beaches even more comfortably. The bungalows are also unique, some are colorful, and some others are visually attractive. One of them is even shaped like an upside down house.

Temajuk is often marketed as the paradise at the tail of Kalimantan. Located at the Indonesian border with Malaysia, this village is slowly trying to shed its poverty using the beauty of its beaches through tourism. 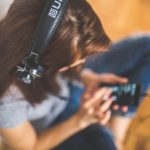 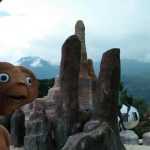