As a national reserve, the entire island is protected from any modern exploitation. However, tourism is a welcome industry because it doesn’t bring a negative effect on the ecosystem. Sangiang Island and the surrounding waters have a very healthy and unique life. Here is all you need to know about Sangiang Island.

Administratively, this island is part of the Wera District, Bima Regency, West Nusa Tenggara. Based on the Minutes of Border Arrangement from the Sub-BIPHUT Office, the area of the Sangiang Island Nature Reserve is 7,492.2 hectares. If you start from Mataram, you will need 17 hours to reach this island. First, you have to go overland to Bima for 12 hours. Then you go to Wera for 2.5 hours, before eventually ride a boat for two and a half hour more.

There are a lot of myths and legends regarding this island. Some say that the island was the reason why sea water is salty. The most common legend says that there were two traders who met at Sangiang; namely Safiri Gadi and Safiri Sango. They both have animal crews. The fought until it was only the two of them remains. They then realized that they were long lost, brothers. Their crew was resurrected and their ship became the mountain.

Sangiang has a lot of unique and endemic flora and fauna. Practically, this island is uninhabited. However, there are some seasonal farmers who come here in a certain month to farm. The land here is very fertile. The main and original resident of this island is the deer. They are protected from wild hunting.

There are actually many activities you can do on this island. However, due to the volcanic nature of the mountain, only a handful of people can get here. Trekking and hiking are possible on the island. On the sea, your option is even more abundant. You can swim, snorkel, kayaking, sailing, or even yachting. Unfortunately, you must bring your own equipment here.

Sangiang Island is a wonderful volcanic island. It is still feisty because the volcano is still active and yet the area has wonderful panorama as well as abundant marine life. 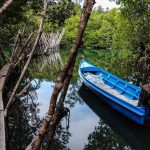