You have probably seen many wonderful temples in Bali, at least the pictures of them. Even if you are not an expert, you will be able to tell that there are some overarching characteristics among them. There are indeed some unique traits you can find in Balinese religious buildings. However, there is always some exception. Pura Dalem Balingkang is one of them.

This Hindu temple has a surprising twist as you can clearly see the inner part of the temple is heavily influenced by Chinese Architecture. Here is what you need to know about this unique temple.

Pura Dalem Balingkang is located in the northern part of Bali, about 75 kilometers from Denpasar. You will probably need a bit more than two hours to reach this temple. Situated on a highland, this temple is administratively located at Pinggan Village, Kintamani District, Bangli Regency. The area is known for its wonderful scenery, especially the sunrise.

There are several version of story about the origin of this temple, but all involve King Jaya Pangus and his Chinese wife Kang Cing Wie. Some say that this temple used to be their palace, some other believe that this temple is the place where the soul of the king and his wife is staying.

The temple has a wonderfully interesting parts. You can find a fort on the outer part of the area, indicating that this used to be the residence of an important figure. You can also immediately see the huge influence of Chinese architecture in the inner part of the temple. The red color dominates the the ornaments here.

It becomes even more obvious in Palinggih Ratu Ayu Subandar. You can find Chinese lanterns decorating the Balinese Hindu halls. Even the drape of the doors and windows are red. You also see a huge Chinese coin in one of the worshipping place. This is the most visited area in the temple because it is believed to bring luck.

The Balingkang Temple is not the only remnant of the past assimilation between the two cultures. You can also see it during Balingkang Festival. This festival showcase the harmonious interaction between Balinese (Hindu) and Chinese (Buddha). It’s showing a carnival, seminars, and other cultural activities.

Pura Dalem Balingkang is a monument that shows how Balinese is open to differences. Even though they strongly hold their own culture and tradition, they are also open to other people with different background and beliefs. 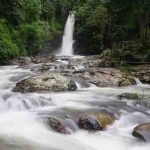