Lombok is often dubbed as the unspoiled Bali as both islands lies next to each other with only narrow strait to separate them. They share similar landscape, including volcano and beautiful beaches along their coastlines.

Lombok, the unspoiled paradise, is lagging behind Bali in term of tourism infrastructure and accommodations, but it’s catching up real fast. With a push from central government, the development of tourism here is accelerated in many areas.

Beautiful beaches are abundant all around the island. However, the ever intimidating Mount Rinjani is offering a different experience with a challenging hike. Lombok is also being developed into a world class tourist destination with the construction of new road, hotels, and even circuit. Here are some of its best tourist destinations.

West Lombok, where it all began

West Lombok is the administrative center of the whole West Nusa Tenggara province. With infrastructure being built earlier than many other places in the island, it’s understandable that tourism here flourished first.

Senggigi beach was the first beach from this island to be known internationally for its beauty. World class hotels and other amenities like golf courses are built on the western part of the island. Mataram, the capital of the province has developed into a big city that cater to most of international travelers’ needs.

Parties on the Gilis

In local language, Gili means island. For international tourist thou, Gili Islands means the three tiny island at the northwest coast of Lombok. Gili Air, Gili Meno, and Gili Trawangan. Each of the island has small resorts to accommodate tourists. Gili Air is the closest to the mainland Lombok and popular with honeymoon couple and also watersports.

Gili Meno is a turtle sanctuary, offer a quieter destination with swimming beaches. Gili Trawangan is by far the most popular of the three. Known as the party island, Gili Trawangan is also popular diving spot as well as snorkeling. Entering the Gilis are free, you only need to pay for the boat ride.

If you visit Lombok, it is impossible to miss the majesty of Mount Rinjani. Second highest volcano in Indonesia, Rinjani dominates the island’s vista with its towering presence. Rinjani has a large crater with huge crescent shaped lake; the spectacular Segara Anak.

It is a sacred place in Hindu and many people from Bali comes to this crater each year to hold a religious ritual. A new small cone peak is formed by several eruptions in recent years, aptly named Gunung Baru (New Mountain). Rinjani is fully climbable and the entrance fee is IDR150,000 per person per day.

Mandalika Resort is a huge project to maximize the tourism potential in Southern Lombok. A long stretch of beautiful beaches, great waves ideal for surfing, and scenic landscapes are the untapped potential. The central government has made Mandalika as a Special Economic Zone to accelerate the development of the region.

There will be lots of luxurious hotels and resorts, complete infrastructure, and also a world class racing circuit in Mandalika. Beaches from Kuta to Batu Payung will be connected intensively to cater the flock of tourist there.

How to get There and What to do in Lombok

Lombok International Airport is served by many daily flights from and to many big cities in Indonesia as well as Kuala Lumpur and Singapore. This airport is located in the middle part of the island so it’s easy to explore from there.

There are ferries operating daily from Padangbai (Bali) and Poto Tano (Sumbawa) to Lembar and Labuan Lombok. You can also choose to pick fast boat from Bali with a higher fee. Getting around the island is enjoyable by renting a car or motorcycle. In some places, you can also rent a bike and Cidomo (a horse powered cart). 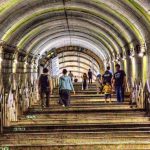